A painter that seems very relevant to Part 3 on ‘Expanse’ is the Russian painter of Greek descent, Arkhip Zuindzhi (1842-1910). He was known for landscapes, particularly the use of vivid colours, particularly green, to depict the illumination of the landscape,  particularly of his native Ukraine. He was of a poor background and although he was sent to study under the  Russian painter Ivan Aivazovsky as a teenager, he was passed on to one of his students and in fact, had little formal training. However, art historians have suggested that Aivazovsky had an influence on the young Zuindzhi nonetheless: “the elemental sense of light and form associated with Aivazovsky’s sunsets, storms, and surging oceans permanently influenced the young Kuindzhi” (Bowl, 1975). In fact, he appears to have  painted independently, for much of his career often choosing his own studio over public exhibitions and much of his work was known only by his close friends; he largely lived in seclusion for the last 30 years of his life (Ziffer, 2019).

He did achieve fame in Russia from 1880 with his painting ‘Moonlight Night on the Dnieper’, shown at the end of this post. HIs rise to popularity  coincided with an important moment in Russian art history: ‘the founding of the Peredvizhniki—often translated to “wanderers” or “itinerants”—movement. In 1863, frustrated by the Saint Petersburg Academy of Art’s adherence to Neoclassical European techniques, 14 students refused to participate in the Academy’s annual Gold Medal competition upon discovering that the chosen topic was the painting “The Entrance of Odin into Valhalla.” ‘ (Ziffer, 2019) and he actively participated in this movement. But although some paintings were exhibited in Paris, he does not appear to be well known in Europe, and I have not heard of an exhibition of his in London, for example. Most of his paintings are in Russia, and I am not aware that the (sold out) exhibition  opened at the Tretyakov Gallery from October 2018 until February 2019 will travel outside Russia. The exhibition made the headlines of the artworld because one of the paintings was stolen, but there are many other reasons why his work is worthy of public attention. 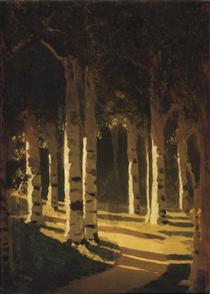 Sunlight in the Park (1908), where the silver birch trees are perfectly assembled and picked out by the light, with the dark, mysterious foliage above and the dark shadows in the foreground. As with most of his paintings it is stylised and to some extent naive, but it captures the essence of such a group of trees, as does the more sketch-like and monochrome Trees, from 1870: 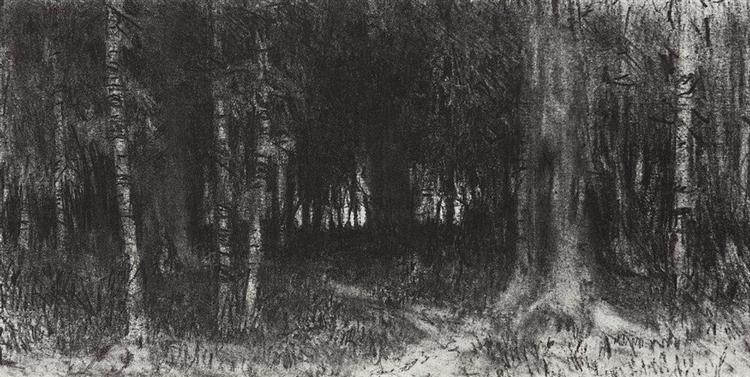 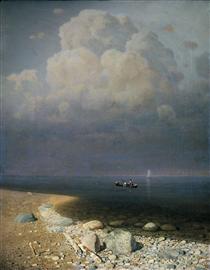 Lake Lagoda (1873)  has a beautiful exposition of clouds, a nicely delineated and detailed foreground (wtih rocks), middle ground the water) and background (the sky), while retaing Kuindzhi’s trademark mystery and darkness. 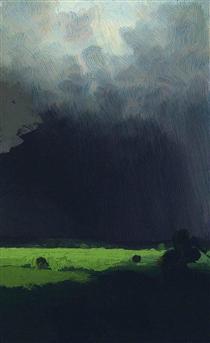 The ‘After a Rain’ paintings are my favourite of his, with this really intense green light, and mysterious dark sky, even though they are probably not the most appropriate for this stage of the course; they are painterly paintings, and I do not believe that you could achieve this dramatic feeling with this subject matter alone; the colour is critically important to the final effect.

I find these paintings interesting, particularly the intense colours and the compression of reality into its essence, which is so necessary to represent landscapes. In some ways they remind me of the contemporary painter Peter Doig, who likewise uses intense colours and also presents a compressed reality. And like Doig, he usually includes some object of human interest in his works; a building or other human construction if not humans themselves. Both painters embrace the unusual subject of darkness (as does, incidentally, Munsch of whom Kuindzhi’s paintings are also reminiscent). Both also veer between realism and fantasy, via mystery. Of course the much earlier Kuindzhi is more realistic in his approach, but his paintings seem astonishingly modern for their time, in their simplicity and almost impressionistic use of colour. Take for example this lovely painting of trees and sky:

Cypresses on a seashore. The Crimea 1887.

Or this sunset – although this made me realise that I am not always sure that I like the paintings: 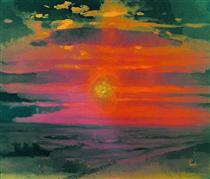 The painting veers close to the vulgar or kitsch, but after staring at it for some while, I believe that it steers clear. After all, it was painted before kitsch was a thing, and I wonder if one’s view of it is tainted by the overuse of crudely used pink and orange in the painting of sunsets by amateur or commercial aspirant Monets, and that this is actually a brilliant forerunner. The more that I gaze at this image, the more that I like it.

In summary however, this is a course about drawing, so Kuindzhi’s use of colour is perhaps a little immaterial. I think the crucial thing is his ability to capture some kind of reality (of darkness, a forest, a sunset, a cloud, water) and distill it in order to structure his paintings, so that the most important elements are bare and stark, while the mystery, fantasy and subtle tonation of the darkness  are maintained, as below in his most famous and seminal work, Moonlit Night on the Dieper (1880): 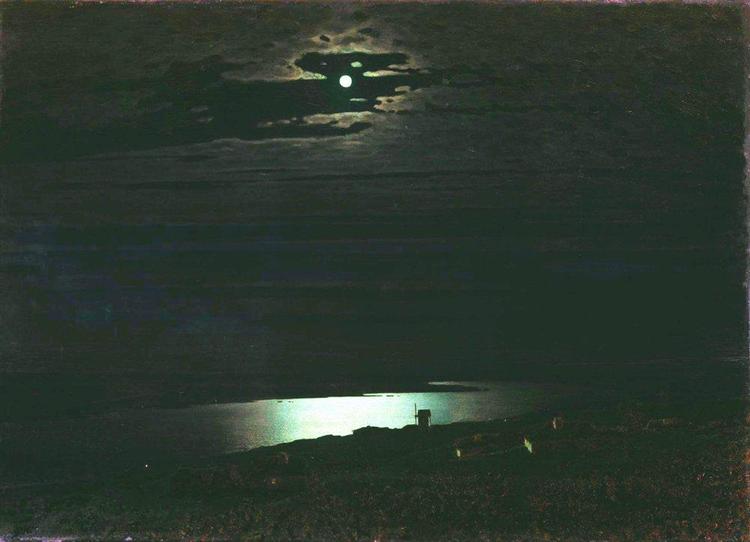 View all posts by zerlinadrawing

One thought on “Arkhip Kuindzhi”